This month I am working on another Flax Sweater. However, this time I am cabling the garter stitch panel on the sleeves instead of making it garter stitch. 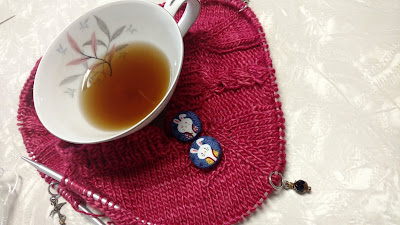 It is 14 stitches so I am purling 4, using the center 6 for the cable, and purling the remaining 4 stitches. This will be a Christmas gift for our new Goddaughter.

I haven't had much time for knitting lately. My kids have needed more help with school this year, than what I anticipated (the homeschool program we use says that starting in a certain grade, children should mostly be independent, although I haven't found that to be the case yet).

However, I was able to start ripping out one of two spots in my afghan that I need to re-knit. 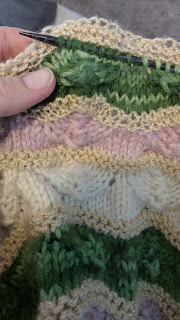 It's a lot more difficult to rip out a cast on route than I anticipated. Had anyone else had trouble? The yarn isn't felting, and it's not knotted. It's just long and tedious. The photo is my picked up stitches on my needle where I will start knitting once the gold section is removed.

Email ThisBlogThis!Share to TwitterShare to FacebookShare to Pinterest
Links to this post
Labels: Bounce blanket, yarn along

It seems like things keep getting busier, and I have less time to know than ever before, even though my kids are getting older and you would assume they would be more independent. Hmmm... 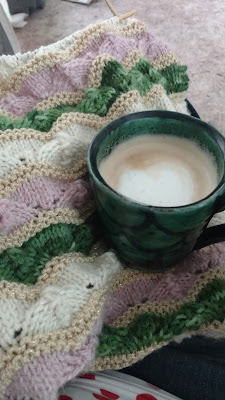 I'm still slowly working through the Bounce blanket by Tin Can Knits. It's coming along nicely, just not very quickly. I think I'm going to run out of my gold yarn though and will need to order more. Almost the entire month of September here is forecast for rain. Ideal knitting weather, don't you think?

Email ThisBlogThis!Share to TwitterShare to FacebookShare to Pinterest
Links to this post
Labels: Bounce blanket, Tin Can Knits, yarn along

Oh my gosh you guys I read a book in May! This is a big deal for me. I usually get interrupted, side tracked by my kids, or am too busy with things going on to be able to invest myself in a plot I have to stop reading about every five minutes. 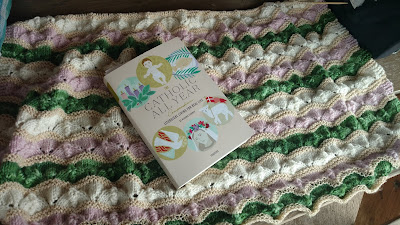 I bought this book as a present to myself and I love it. I couldn't put it down. The writing style feels like talking with a friend over coffee. To me it does anyway.

Maybe it's Divine intervention, but most books about saints that I have sincerely tried to read, are written very dry and unenthusiastically. This book is a treasure trove full of ways to celebrate the Catholic faith multiple times a month and to really live and love your faith and extend your family traditions beyond Sunday Mass and commercialized Christian holidays. I couldn't recommend it enough! It is also available as an e book if that's your preference. I know that it will become a great reference book that I will use often now that I've read through it once and marked feast days and taken notes. 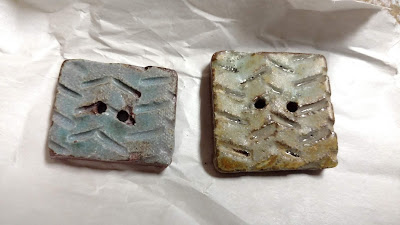 Over Memorial Day weekend, I visited a local pottery store and found these cool buttons. I'll have to make another sweater so I can use them. They're quite large so I don't think they'd go well on anything other than a nice chunky sweater. I'm open to ideas if you have them for me though!

May Yarn Along: A Hat Knitting Marathon!

The month of April was very productive for me, knitting-wise. Mostly in the last week too. I decided (last-minute) to donate craft items to our church craft sale coming up this Saturday and knit 6 hats in 5 days. Yes, my hands are very sore, thanks for asking. The pattern I used is the Beloved bonnet by Tin Can Knits. I made them in varying sizes and made each just a little bit different. I also cleaned a decent amount of yarn out of my stash, which is the best part of all. You can see individual photos of these on my 2019 FO page as well. 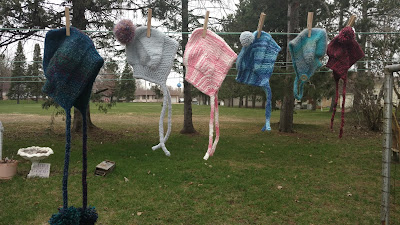 It's a very quick knit, because the pattern is simple and straightforward. It's easy to memorize so you don't need to waste time referring back to the pattern. 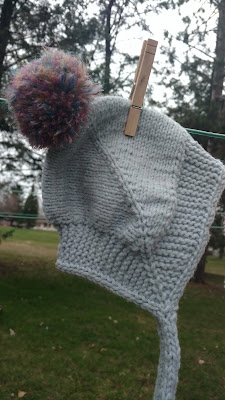 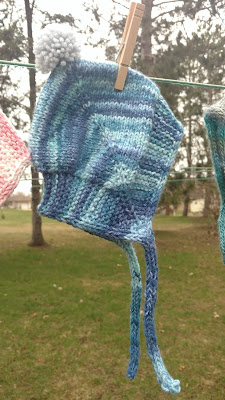 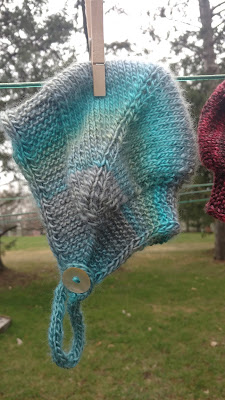 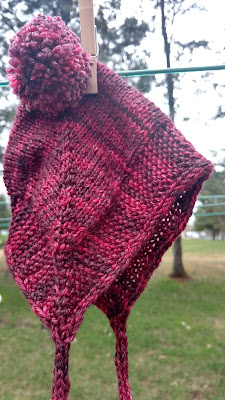 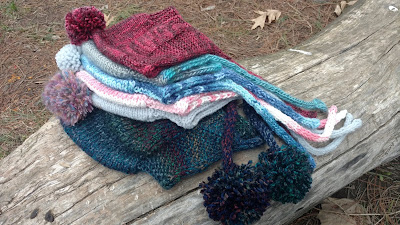 I have a very difficult time making pom poms but I had a lot of practice with these hats and I absolutely love how they turned out! 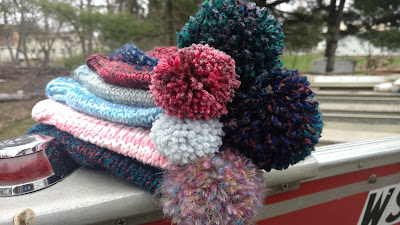 I have also made a little progress on my Bounce blanket, another pattern from Tin Can Knits. 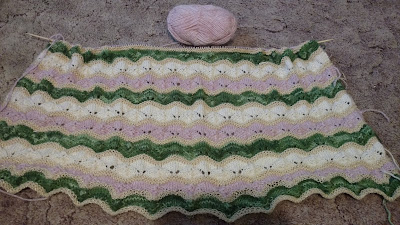 More links here: May Yarn Along.
Posted by Christine N at 10:52 AM
May Yarn Along: A Hat Knitting Marathon!
2019-04-29T10:52:00-05:00
Christine N
Beloved bonnet|blanket|Bounce blanket|hat|knitting|Tin Can Knits|WIP Wednesday|yarn along|
Comments

Anyone in Minnesota and Wisconsin are getting slippery roads all weekend. With the wet snow, hail and sleet, and the ridiculous wind in my area, the only solution is to stay inside. 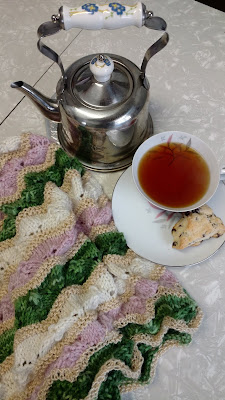 I'm hoping to get some knitting done this afternoon but I also pulled out a tea cup from my set of fine china to help brighten things up inside. 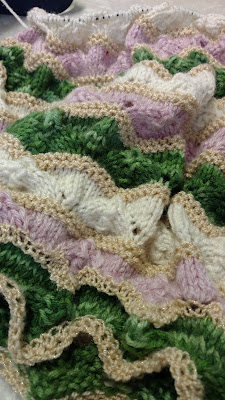 I haven't worked on any knitting since mid March. We have been so busy lately and there's no sign of slowing down anytime soon! But I've definitely added length since the last time I shared this project back in February or March.
Posted by Christine N at 2:44 PM
April Howler
2019-04-11T14:44:00-05:00
Christine N
Comments

I made this hat last night! I cast on around 5 and cast off at about 9:30. This was not a planned project, believe it or not. I was talking about my little one taking the first steps in crawling in my family group chat. Of course one of the uncles said a pith hat was required for a little boy's adventures. Ravelry only has crochet pith hat patterns so I did a quick Google search and this was the only knit hat I found.

The construction of the brim was a bit tedious. It was hard to see what she was doing with it even though the sections of the brim are labeled. It has a triangular 3D shape, so the first 12 rows of the pattern eventually get folded under and you don't see them on the outside of the hat.

Then the pattern tells you to switch the last stitches to the next needle back. I think I would skip this if I make this hat again. My stitch count got totally out of whack and I'm still not sure if that was me screwing up the last decrease row before the brim was done, or just trying to carefully follow along with what the instructions said to do.

Considering the difficulty I had visualizing what the instructions were telling me, I am very happy with how this came out. I think I'll try to make another one if I can at some point. I need to be able to picture things mentally when I do patterns like this, and the way it was written produced the result but was hard to follow, if that makes sense. 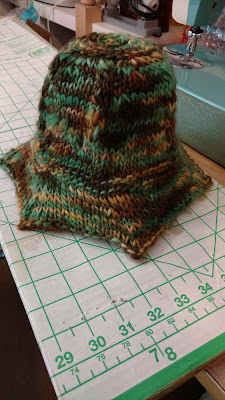 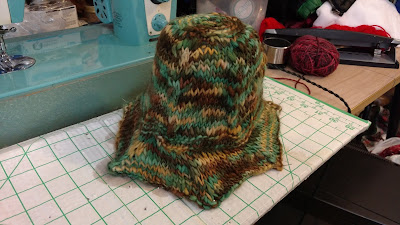 I'm blocking it on one of the kid's lanterns! I was looking for a ball but the light was the perfect shape. 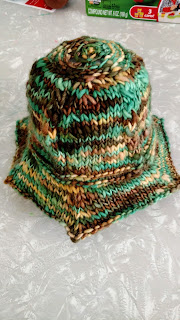 I used a skein of hand spun and dyed yarn that I bought from The Fine Lime. I used size 10US double point needles because I was shooting for a 12 month size. The pattern doesn't specify the size but it implies it was for a newborn or young infant. I do think my gauge adjustment worked great.
Posted by Christine N at 1:06 PM
FO Friday: Pith Helmet!
2019-02-22T13:06:00-06:00
Christine N
FO Friday|knitting|Pith Helmet|The Fine Lime|
Comments

Please do not use any of the personal photos on this blog without my consent. Thoughts and opinions expressed are my own.

Link-Ups I Participate In: